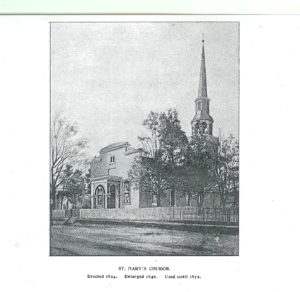 St. Mary’s owes both parts of its name as well as its location to William Hamilton, a distinguished member of a once-famous Philadelphia family that owned a large tract of land in the open country beyond the Schuylkill. In 1808, he set aside two pieces of land in the newly developed “Hamilton Village” to provide sites for an Episcopal church and a Presbyterian one. On July 6, 1824, the cornerstone for the original church was laid by Bishop William White, and on the June 16, 1827 Bishop White came back for the consecration. By 1871 the congregation had grown so large that it needed a much larger building. The present church was completed in 1873. It is a good early example of the neo-Gothic standard that dominated American church architecture for the last half of the 19th and first half of the 20th century. It is cruciform in shape, and the church’s High Altar “faces” East towards Jerusalem. There are two side chapels, north and south, St. Philip’s and All Saints, which has just been restored. The stained glass in St. Mary’s is a fairly comprehensive history of English and American stained glass artistry. 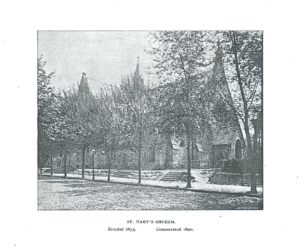 In 1890, the sanctuary was redesigned to accommodate an altar donated by William Henry Wetherill. The High Altar was designed by the Rev. J. Bloomington Wetherill and Sir Edward Burne-Jones as the Italian exposition piece for America’s Centennial in 1876. The reredos and altar are an amazing mosaic, composed entirely of tiny piece of Italian stone, marble, and pebbles fashioned into an intricate representation of the Life, Crucifixion, and Resurrection of Christ. It was all given by Dr. Wetherill as a memorial of his brother and mother. The church is on the register of the Philadelphia Historical Commission.

During the long years of the Vietnam War, St. Mary’s was both a prophetic voice opposing war and supporting peace and a literal sanctuary for many young men who for reasons of conscience would not serve in the military. That commitment to achieving a just peace in the world and opposing war is still alive and well. What is clear to many of us today as in 1962 (when the Vietnam conflict began) and given the enormity of the United State’s own injustices, is that there are better ways to achieve peace abroad and equity at home than by dropping million dollar bombs from billion dollar planes, often on civilians.

For many years, St. Mary’s has been involved in the struggle for achieving full civil rights for those people in the United States historically denied those rights: people of color, women, and sexual minorities. One way we do this is by being attentive to issues of language in our liturgy, understanding that the language we use shapes our view of the world as well as reflecting it. We have also, through the years, supported inter-racial discussion groups to foster dialogue and change, and hosted the first lesbian and gay religious organizations (Integrity and Dignity) in their early years. During the late 1980s, when southeast Asian refugees began to settle in large numbers in University City, St. Mary’s pioneered a program that provided education, health care, and social supports for many of those newly arriving in the neighborhood, particularly those coming from Cambodia. This program was later absorbed by community-based organizations. Similarly, St. Mary’s founded a co-op preschool for working families in the neighborhood that continues today as the St. Mary’s Nursery School, an independent, secular nursery school serving West Philadelphia. At St. Mary’s we strive for justice and peace among all people, respecting the dignity of every human being, and this is part of how we proclaim the Good News of God in Christ to the world.

St. Mary’s has had a close relationship with the University of Pennsylvania since the college crossed the Schuylkill in the 1870s and began moving westward. Today the parish serves as the Episcopal Chaplaincy to the University, and our rector is an associate of the University Chaplain’s Office. Welcoming and providing a temporary spiritual home for students at Penn, Drexel, the University of the Sciences, and other local institutions of higher learning is one more way that we strive to serve Christ in all persons, loving our neighbor as ourself.